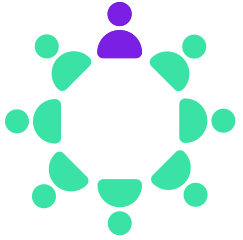 Changing the world one frame at a time 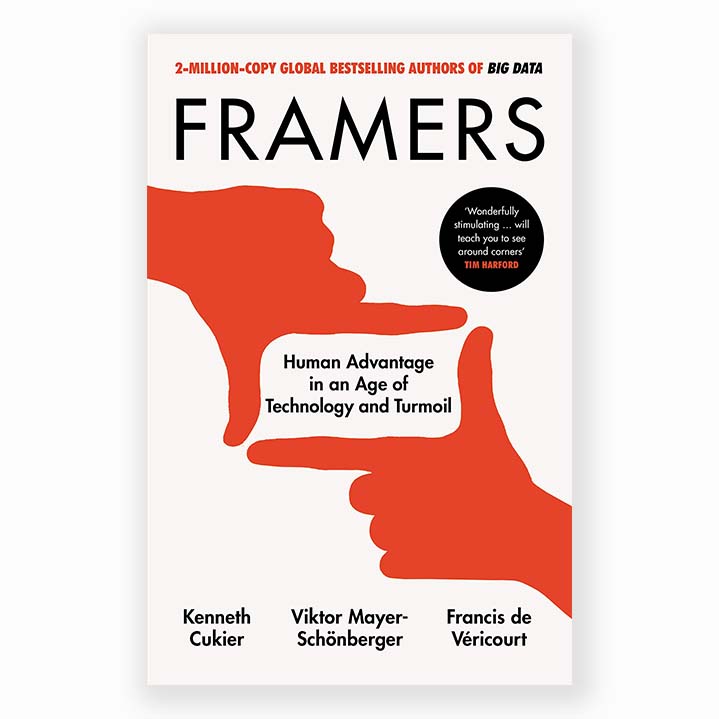 Imagine a book that can teach you to see round corners. This is how one reviewer described ‘Framers: Human Advantage in an Age of Technology and Turmoil’, written by award-winning journalist and technology commentator Kenneth Cukier in collaboration with academics Francis de Véricourt and Viktor Mayer-Schönberger.

To discover what light the book can shed on such topics as the value of AI and the secrets of successful decision making, Cukier agreed to talk to Business Innovation Leaders Forum podcast host Lionel Snell.

It has become commonplace, believes Cukier, to view humans as doomed by their own shortcomings to be disintermediated by super-intelligent algorithms. Left to our own devices we produce poor outcomes. Witness multiple conflicts in the Middle East, the 2008 financial crisis and muddled responses to the global pandemic.

The idea is spreading that humans are poor decision makers, says Cukier. And that our future survival must therefore depend on advances in Big Data and artificial intelligence. His new book challenges that thesis, arguing that humans have enormous potential as decision makers via their ability to use mental models and envision new realities. Great outcomes are not only about making the best choices based on known data, but generating better alternatives to choose from, sometimes by challenging accepted thinking. This is what he calls ‘framing’.

Cukier believes that history is ripe with examples of humans making progress by framing, or reframing, their perceptions: “There’s one that got a single sentence in the book, because it was so obvious we didn’t need to develop it more,” he explains. “It’s how the world saw the heliocentric versus the geocentric theory of the universe. Today, in the 21st century, it seems like weak beer. But 500 years ago, it was a complete revolution, truly a reframing, because it forced human beings to not see themselves as the centre of the universe but as inhabitants of an ordinary planet revolving around an ordinary star. That moment was absolutely extraordinary, a reconceptualization of who we are as human beings. If we reframe how we see the world, we come up with better alternatives and better decisions.”

Cukier identifies another strand of modern thinking which says that AI with its superior reasoning ability will come to dominate us, perhaps against our will. As an example of the superiority of human reasoning over AI he cites Regina Barzilay, a professor at MIT’s Computer Science and Artificial Intelligence Laboratory, who brought new thinking to the process of drug discovery through artificial intelligence.

“By teaming up with other people at MIT, particularly synthetic biologists, she saw ways to apply AI tools to learn new things and uncover new domains of knowledge that we didn’t think we could do before,” he explains. “She made people realise that it wasn’t artificial intelligence that uncovered new antibiotics, but the work of humans learning to reconceptualize the business of identifying what would work and what wouldn’t.”

Cukier warns of the twin extremes of, on the one hand, hyper rationalists who want a world of ice-cold algorithms because they don’t trust humans, and on the other side populists appealing to base emotions with easy answers.

He believes framing is an antidote to these twin dead ends: “Because with framing you have both the rational in terms of the causal nature of how the world works, and on the other hand the counterfactual, the world of imagination, the need to pose the question ‘what if’. Seeing the world not as it is, but as it could be. That’s the value human beings have, and interestingly what AI does not have.”

As an example of how successful thinking often cuts across the grain, he brings in Nokia and how it grew to dominate the cell phone industry on the basis that phones must grow ever smaller and cheaper: “Then Apple reframed the whole market and trumped Nokia with the bigger and more expensive iPhone.”

Cukier recalls how he met the CEO of Nokia a few months before the iPhone was launched: “We all knew it was coming down the pipe,” he says. “It was an open secret. This CEO asked me what I thought of the iPhone with all its technical goodies embedded. I told him I thought Steve Jobs was used to the computer industry where you launch things that are buggy and then you fix them in the next iteration. Telecoms, I said, was more about complete ‘five nines’ reliability on day one. I said I thought the iPhone was Steve Jobs’s Waterloo, and Nokia had nothing to worry about. I was completely wrong, because I was stuck in the mental model of the telecom industry.”

For another example of how framing changed everything, Cukier brings in Brexit, where Remainers put so much faith in rational arguments about the benefits of Britain staying in the EU. Then Brexiteers came along with a fresher, more seductive frame and won.

“I never saw Brexit as particularly serious until two weeks before the vote when public opinion polls seemed to suggest that there was actually momentum around it,” he says. “I was surprised that the Remain camp was not admitting the shortcomings and the problems of the EU, but then making the case that despite all these problems it would still better to be in. They should also have been making the case that Britain already had a very a la carte approach, by not being part of the Schengen accord for open borders, and not being part of the Euro zone. They didn’t do that, but took the stance that everything about the EU was good and right, and everything about the Brexiteers was completely daft and wrong. That doesn’t work. If you press people on both sides, there’s truth in the centre.”

A central idea of his book, says Cukier, is to get people to discuss differences, invite differences, embrace tensions and embrace conflict: “And through the conflict of ideas to understand that tension is like friction, that although painful it will also create fire and things that are new and beautiful. Take the Brexit debate. You could have imagined a whole range of different ways in which Britain could have redesigned its relationship with the EU, rather than a hard Brexit a hard cut off, which is, in effect, what we’ve had. Framing would have improved our decision making.”

Success, he says, often creates its own weakness by encouraging a belief in a single frame of truth. He sees examples of this in the corporate world: “You get settings where people are supposed to be free to think. But as soon as the ‘hippo’, in other words the highest paid person, expresses their opinion, everyone just wants to rally around this leader. It’s chimpanzee politics. What wise leaders do is to have individuals deliberate on their own or in smaller groups. Get them together and speak too soon, and you get either the loudest person’s opinion, or the highest paid person’s opinion, or the leader’s opinion. And that quashes the natural diversity of thinking that would otherwise exist.” 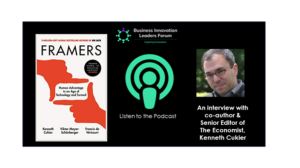 The podcast is available on Blubrry here.

And on iTunes here.

You have already reported this
Clear Clear All 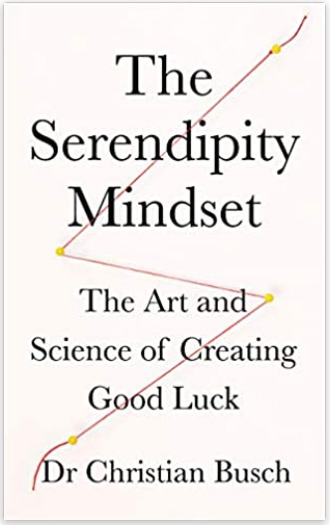 The Serendipity Mindset: The Art and Science of Creating Good Luck

By Dr Christian Busch
Serendipity is an aptitude for making desirable discoveries by accident. To other people it looks like “good luck”, but it is more the ability to recognise and seize an opportunity, rather than have good fortune thrust upon one. Finding a wallet stuffed with money on the conference room floor is good luck, whereas holding it up and asking if anyone has lost their wallet might be the beginning of a valuable friendship – that would be serendipity.

Chance encounters, or strokes of fortune, feature in countless stories of business success. This book looks beneath the surface, reveals and teaches the mindset that can transform pure chance into opportunity. The author is director of the Global Economy Program at New York University’s Center for Global Affairs, and a lecturer at the London School of Economics.

Serendipity is an aptitude for making desirable discoveries by accident. To other people it looks like “good luck”, but it is more the ability to recognise and seize an opportunity, rather than have good fortune thrust upon one. Finding a wallet stuffed with money on the conference room floor is good luck, whereas holding it up and asking if anyone has lost their wallet might be the beginning of a valuable friendship – that would be serendipity.

The author says “This is a book about the interactions of coincidence, human ambition and imagination”. In the above example: finding the wallet is the coincidence; ambition is the desire to make something of the discovery; add imagination and you open up a whole menu of possibilities: from spending spree to earning a reputation for honesty – or even making a wealthy friend.

Business is typically forged on human ambition and imagination, but early success often feeds an appetite for control – and “control freaks” can be blind to the opportunities thrown up by the unexpected. They only see chance events as distractions. If plans go awry, they may blame the failure on “bad luck” rather than admit their own inflexible attitude.

The author himself admits to being “a German who is used to planning” and prone to feel anxious when something unexpected happens. That makes him an ideal teacher, because he has worked hard to discover and analyse the mindset that enables one to “connect the dots” and cultivate serendipity. He presents a goldmine of examples from science, business and life where an apparent mishap or failure lead to a breakthrough.

Indeed, studies suggest that around 50% of major scientific breakthroughs emerge as the result of accidents or coincidences. A well-known example is Alexander Fleming’s discovery of penicillin, launching the whole field of antibiotics. Other examples include X-rays, nylon, microwave ovens, rubber, Velcro, Viagra and Post-it Notes – where would we be without these!

The book goes beyond the ability to recognise and respond to opportunities in chaos, but the subtitle – The Art and Science of Creating Good Luck – is actually a bit misleading. True, he does show ways to develop better fortune, but it would be better to call it “inviting” or “encouraging” good luck. For example, he suggests better ways to start a conversation with a stranger – ways that will make it more likely to lead to chance connections or shared interests.

The publishers may have chosen the word “creating” to make the book appeal to the human desire to control – for control freaks are exactly the readership that would benefit the most from this book’s wisdom and practical advice.

For the rest of us, it offers a great way to rediscover the sense of play that is so important in life – and too often lost in business.

“Following the success of The Serendipity Mindset hardback, a paperback edition has also now been launched under the title “Connect the Dots”.

How to upload a file